What is the initial point of the project?

Entering the labour market successfully when their schooling is finished is a challenge to young people all over Europe, especially if they are considered disadvantaged. The problem is not only visible in the economically weaker countries in Southern and Eastern Europe, but also evident in the stronger countries. The barriers that disadvantaged young people face are generally the lack of a proper school degree or educational qualifications, often times accompanied by a difficult family situation and the like. On top of this, young migrants often deal with insufficient language skills that are imperative for passing a vocational training program and for finding a job successfully.

To address this problem, many countries in Europe introduced ‘work-oriented learning’ or rather ‘work-based training’ (WBT) methods in the VET system to create a better link between theory-based learning and practical training.

What do we wanted to achieve? 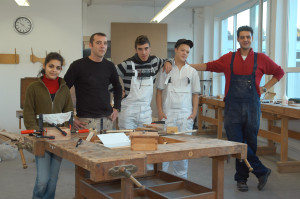 This was the initial point of the project that was carried out in the year 2015-17 comprising educational and vocational institutions from 9 European countries. The general aim of the WBT project was to contribute to sustainable learning success and to secure the smooth transition from school to work for young students with learning difficulties, thus fostering the successful integration of the target group into the labour market. The main strategy to achieve the aim was to ensure the exchange of good practices and experiences on Work-based Training developed in those countries where the project partners are based. In this way, the partner organisations contributed in laying the foundations for the creation of a European Area of Skills and Qualifications. The project was designed as a project with a focus on the exchange of experience and expertise while pursuing a concrete work plan.

What did we do?

First, the project examined the situation of disadvantaged young people in the context of the various national school-to-work transition settings and the specific work-based training approaches. The findings were published in an Overview on School-to-Work Transition in Europe. Following, an Online Survey was carried out, addressed to the main three target groups dealing with school-to-work transition and work-based learning, namely teachers, trainers and young people themselves. The results were published in a Report on Findings and finally led to a ‘Manual on Work-based Training’, describing the national school-to-work approaches, offering proposals for improvements and documenting numerous Examples of Good Practices from the partner countries.